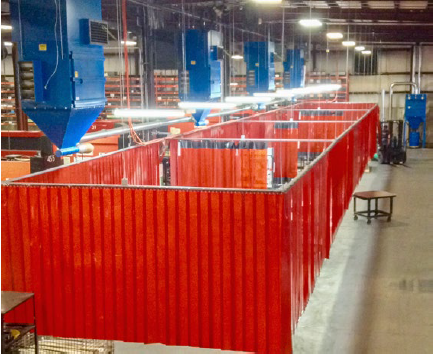 While air quality was within the legal safe limit, a persistent haze prompted a search for a fume removal system

A persistent haze hung in the air at Muza Metal Products due to their welding operations. While air quality was within the legal/safe limit, president John Kriz, believed that if he didn’t want to work in those conditions, no one else should, either. He wanted to improve air quality for his 250 employees, and show touring prospective clients a clean production space

Kriz was familiar with source capture, with rows of hoods and individual booths for specified tasks, but he was open to other solutions, particularly if they could work for multiple applications. When Hastings suggested an ambient system vs. a ducted, source capture system, he was skeptical, having no experience with ambient air cleaning.

However, upon seeing an ambient system in action at a large manufacturing facility where he could easily see from one end of the building to the other, he was open to the possibility. After doing more research about the technology and learning about control logic and self-cleaning filters, he was sold.

The ultimate solution was a combination of source capture overhead booths and IVEC Intellivent™ GVSC (General Ventilation Self Cleaning) collectors.

After “flipping the switch” on the new system, the haze disappeared along with a measured 50% reduction in airborne particulate. In addition, IVEC systems are the only collectors designed to self-adjust to optimize air filtration with a low filter pressure drop. With efficient and offline cleaning only, the GVSC units maintain 24/7 operation with zero downtime.

Even workers who were initially skeptical found the healthier environment eliminated headaches and dark nasal discharge they thought was just “part of the job.” And as Kriz notes, “not even half as much maintenance time is spent on the units and on the housekeeping.”

In previous jobs, filter fires were a too common experience. Costly both in time and money, and the immediate response from floor workers was 'well, maintenance forgot to clean that one.' This system cleans on its own, on a schedule. The only minimal maintenance is to empty the housekeeping system once in a while. But with alarms and sensors, even that becomes a simple, user-friendly task.

Contact us for filters, service, rental units and support for all brands and applications.
Call 1.800.236.8450 or email us or order online.